The variety and complexity of gun charges and other weapons charges can be confusing and overwhelming. If you are facing a weapons violation of any kind, this is not the time to try to deal with it without help. You need an experienced weapons crimes lawyer to guide you through the process. Matthew Shrum will review the prosecution’s case, investigate the facts, and guide you through the process of mounting a defense to the charges. He will provide you with the benefit of his experience and formulate an intelligent and realistic strategy to protect your interests.

There are a number of categories of weapons crimes in Texas. They include prohibited weapons, unlawful carrying of handguns and other weapons, crimes related to where you possess a weapon, status offenses that make it illegal to possess a weapon because of who you are, and the illegal transfer of weapons, among others. These crimes have different elements, and each has exceptions, sometimes following by exceptions to those exceptions. So if you have been charged with a weapons crime, the first step is to find the right attorney. Call Mr. Shrum today to arrange for a free consultation.

Unless you fall within a specific exception, it is illegal under any circumstances to possess any of the following (PC 46.05):

There are a host of exceptions to these rules. But if no exception applies, most of these are felonies of the third degree.

Under section 46.02 of the Texas Penal Code, it is a crime to carry certain weapons, regardless of whether the item itself is a prohibited weapon. Specifically, it is illegal to knowingly, intentionally or recklessly possess a handgun, an illegal knife (knife longer than 5½ inches, and others), or a club (blackjack, nightstick, etc.) if you are not

In the case of a handgun, even if it is in your vehicle, for example, it is still a crime to possess it

Some weapons crimes exist not by virtue of the weapon itself being illegal, or by the place or manner in which you carry or possess it, but rather by your status. Under section 46.04 of the Penal Code, possession of a firearm is prohibited by the following classes of people:

There are many more laws dealing with weapons and weapons offenses. They include unlawful carrying of a handgun by a license holder, possessing certain weapons on school premises and in other enumerated places, illegal transfer of a handgun or ammunition, and others. Finally, there are crimes that exist independently of the possession or use of a weapon, but which carry enhanced penalties if a weapon is involved. 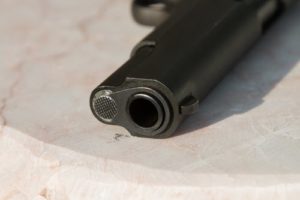 The range of weapons laws is substantial. Many of these offenses are felonies, and carry severe penalties in the event of a conviction. If you are facing a weapons charge, call the Law Office of Matthew Shrum. We’ll use all our experience and skills to make sure you are provided with a thorough and effective defense.